The IRGC is the Main Organ of Suppression and Protection of the Islamic Republic and a Terrorist Organization!

The IRGC is the Main Organ of Suppression and Protection of the Islamic Republic and a Terrorist Organization!
یک‌شنبه, 22. ژانویه 2023 - 14:21

The Central Council of the Left Party of Iran (People's Fadaian)

The Islamic Revolutionary Guard Corps (IRGC) was established with the duty of guarding the Islamic Republic, and over the past 44 years, it has played the main role in guarding the existence of the Islamic Republic, exporting the Islamic Revolution, suppressing the opposition forces inside the country, terrشorizing abroad, suppressing people's struggles, dealing with social movements and implementing plans of the regime. The IRGC has conquered various social spheres; It has its own intelligence agency, numerous prisons, and even its own special media; It manages the Basij organization (para-military organization), which is present country-wide and in many centers and is a tool of control and repression; It controls various cities and regions; also, the atomic project of the Islamic Republic and military industries are under its control.
The IRGC has also snatched the economy of the country and has a large part of it under its sphere of influence by creating various companies and holdings in the field of production, distribution and financial sector. In addition, it has taken over oil projects, petrochemical industries, and large industrial projects. It makes huge profits from the sale of oil by circumventing sanctions. In a word, it is a powerful government next to the official government of the country.

The country's foreign policy in the region has been entrusted to the IRGC and is managed by the Quds Force of the IRGC, which is carried out by organizing independent militia forces and funding these forces from the pockets of the Iranian people. This part of the IRGC plays a prominent role in the internal developments of Lebanon, Syria, Iraq and Yemen. The Quds Force's actions, along with the Islamic Republic's policy regarding Israel and not recognizing its existence, opposing the efforts for peace between Israel and the Palestinians, have had negative effects on the process of efforts for peace and collective security in the region.

The IRGC does not recognize a border to expand its sphere of intervention. In addition to cities and regions, like an official army, it has special naval, land and air forces.

In fact, the IRGC is the main arm of the Supreme Leader and there is no supervision of its actions and plans, and just like the Supreme Leader and the leadership of the Islamic Republic, it is an unaccountable institution that stands above the laws of the Islamic Republic and with its own interpretation of its duties in the Constitution, reserves the right to interfere in all matters. This is also the starting point for the development and expansion of involvement in various fields from politics to economy, information-security, culture, sports, foreign policy and macro policies of the country. Khamenei's reliance on this force and its use as an armed party during the past three decades has increased the authority of the IRGC and made it the main body of power in the Islamic Republic under Khamenei's command.

More than 500 people have been killed in the revolutionary movement. The IRGC and its repressive organs played the main role in this massacre. The IRGC Intelligence Organization together with the Ministry of Intelligence arrested about 20,000 field, political, union and civil activists, tortured a large number of them and made serious cases against them. Based on arbitrary cases, 4 prisoners have been executed so far and more than 100 people are facing the death sentence due to the creation of false accusations. Some have also been sentenced to death and it is possible to be executed at any moment. In support of the "Women, Life, Freedom" movement, it is necessary to increase the pressure on the IRGC from the political and economic point of view, sanction the IRGC and put it on the list of terrorist organizations. This action is in the interest of the people's movement.

We consider imposing sanctions against institutions of repression and supporting the demands of the revolutionary movement to serve the people's struggle to topple the Islamic Republic and strengthen their efforts to get rid of the ruling tyranny. We emphasize that:

1- The IRGC is the main pillar of protecting the criminal regime of the Islamic Republic and a special organization for suppressing the people.

3- Liberation from the Islamic Republic and the establishment of freedom, democracy and equality in Iran is possible only through the hands of the Iranian people and their full-scale struggles.

The Central Council of the Left Party of Iran (People’s Fadaian)
January 20, 2023 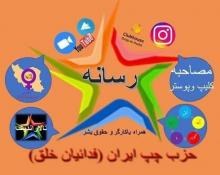 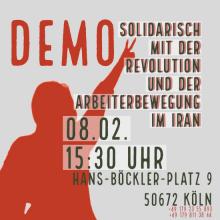 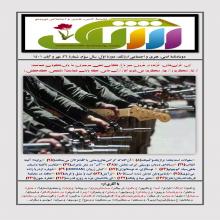